Craig Burt finally got the call.  The Chilliwack umpire made his first appearance as an umpire in professional baseball on September 3 when he worked in the Florida Complex League, the Minor League re-brand of the Gulf Coast League.

Following his successful completion of the Wendelstedt Professional Umpire School program in January 2020, Burt was informed that he had made the grade and would be offered a position in the Minors for the 2020 season.  Then, of course, Covid happened and all of Minor League baseball was shut down for the season.  Enter 2021. And enter Major League Baseball’s restructuring of the Minor Leagues.  40 teams gone with the stroke of a pen, about 1000 Minor League players suddenly out of work, 200 coaches, umpteen stadium and front office jobs, and 40 Minor League umpires and prospects suddenly no longer able to pursue their dreams in the traditional way.

Craig was one of those unfortunate individuals caught up in a numbers game and a Big League business decision that had nothing to do with him or his work and everything to do with the almighty dollar.

So it goes and Craig was not alone obviously.  As the months dragged on, and Covid tagging along with it, Craig was told that there was no job for him anymore for a variety of reasons, but that he would be on a call up list to replace the eventual changes that would come later in the summer.   Umpires who couldn’t cut it and quit, umpires who just aren’t good enough and get released, or those who get injured and are out for the rest of the season.

Starting well back in the 10 spot on that list, Burt had little hope of getting that call in 2021 and was already looking towards how he could achieve his goals for the 2022 season.  But little by little he moved up on that list, and by July 16 was up to #3.  Then at the end of August he finally received “the call” informing him that Minor League baseball was hiring him as an umpire for the balance of the 2021 season. His assignment – Florida State Complex League – the old Gulf Coast League.

Florida State Complex League is the equivalent of Rookie Ball (what the Vancouver Canadians used to be classified as) and is the starting point for all new hires into professional baseball and the first stop for most of the drafted or signed players.  There are 16 Major League clubs fielding teams there.  The other 14 are based in Arizona.

On September 3 he worked his first games.  A doubleheader in North Port Florida between Atlanta and Tampa’s clubs after his original game the day before had been rained out.  And on September 7 he worked a game with fellow Canadian Alex Laurie of Nova Scotia, which marked the first time that 2 Canadians had umpired a minor league game together on the same field.  Infact Burt is one of 7 Canadians in the Minor Leagues at the moment, and the first from BC to work in Minor League Baseball since Ian Lamplugh of Victoria 2 decades ago. 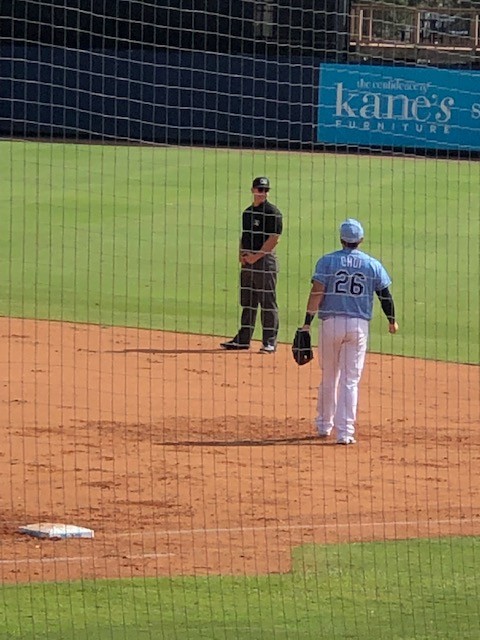 Burt worked the remainder of the regular season, which ended September 18.  And now, the waiting game starts again.  Waiting to see if his 3 weeks in Pro Ball were enough to earn him a spot in the 2022 Complex Leagues or if it’s back to Umpire School in January to compete again for those elusive contracts.  It’s a tough life but one he cherishes.

There’s a lot of reflection for Burt as he contemplates how he got to where he is today.  The native of Rosedale, BC started umpiring a decade ago at age 11.  And after nearly quitting umpiring in his late teenage years, he stumbled across Rhonda Pauls from the BCBUA who invited him to the BCBUA Umpire Academy weekend in Kamloops.  He attended that event and found a new interest and fire in his belly that translated into a renewed effort to take umpiring more seriously.  His goal was to get into the National program, which he did in 2017.  From there, it was a stop in Saskatchewan for the Peewee West Nationals in 2018, followed by another trip to the Peewee West Nationals in Cloverdale the following year.

During that period in time, he worked diligently at his skills and attended several high level BCBUA training opportunities, meeting MLB umpires Stu Scheurwater (Regina, Sask) and Tripp Gibson (Everett, Washington) at various events.  It was through discussions with them that he decided he wanted to take the next step and attend Professional Umpire School and start the long journey of hopefully becoming a Major League Baseball Umpire down the road.  He applied for, and was awarded with the Ron Boutang Memorial Umpire Scholarship in 2019.  It paid his tuition to camp – the only way he could afford to go.

And with the financial help from his family and friends, and his savings, he was able to make the 6 week trip to Florida for the school.

Burt talks glowingly about the BCBUA and their Umpire Academy program as being pivotal in his development.

“Going to the Umpire Academy was an amazing experience and an amazing opportunity for me to experience what it’s like to be around high level umpires and listen to what they had to say during the instruction.  It sparked a fire in me to seriously pursue umpiring at higher levels and I was able to get into the National Program in just 3 years after that.”

Burt talked about Baseball Canada as being a foundation and pillar of his high level development.

“Baseball Canada and what they teach gives us a great advantage to go down to Pro School and succeed because everything they teach down there with mechanics is essentially the same as what we’re taught in Canada.”

Regina’s Stu Scheurwater agreed when he was asked earlier this year about his success.” Baseball Canada was my foundation.  It was everything.  It allowed me to get a step ahead of everyone”

He’s early in the process, and he knows it.  But, he has faith that he can do it, and he is following his passion and his heart.  A must-have when taking on a challenge like this.

“Who would have known that a kid from Rosedale would eventually be one of a few Canadians working in Professional Baseball?”